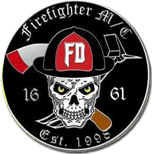 Our sole charitable focus is towards the children of F.D.N.Y. & Axemen firefighters who's children have special needs. We established this club to help our own because when all else fails, we know that our brothers will be there for us.

On June 21st, 2013, the 26th chapter of the Axemen Motorcycle Nation, became an official chapter, Axemen MC NY3. This chapter was formed up with 10 New York City firefighters, active and retired, with a sole mission of to raise money for special needs children of FDNY members.

How and why this MC got established, goes back to 25 years ago, when as a 5 year member of the FDNY, I had 3 children, 2 of which were born with cerebral palsy and wanted to start a charity to help members like myself.

There was many days were we struggled as a family and needed help, but day by day we got through it. If it wasn’t for the Insurance coverage that our job provided, we would have not been able to survive this ordeal. But the Insurance didn’t cover everything.

Firefighters are a special breed, always looking to help each other in their time of need, but will never ask for help themselves. Once on duty in the firehouse, it’s about the job and having a little fun. Talking about their personal life stays personal.

I wasn’t able to get this charity off the ground due to what was going on in my personal life and life went on.

My 1st daughter Courtney passed on April 21, 2011 due to complications of her illness. It ripped my heart open again as it did when we found out at 3 months old, that she had cerebral palsy. She was 26. Now with much more time on the job and more connections to people that could help, my mission now, was to get this charity established.

The 26 Chapters of the Axemen Nation all raise money for many organizations with in their area including Burn Camps, Flight of Life, local children organizations, and list goes on. Being that there are a lot of members in the FDNY that enjoy riding motorcycles, I thought what a great combination to get this charity off the ground.

After talking to some of my coworkers that rode and explained to them what the intent of the group was to be, I was able to get the minimum required 10 to get established within 2 weeks. On June 21st, 2013, we became an official chapter of the Axemen Nation.

Since then, the club grew to 15 members, had 2 annual fundraisers and attended numerous charity events, making donations to some of our FDNY brothers in need. We now support the revitalized “Kids Connect Program” sponsored by CSU. This program was established as a direct result of the aftermath of 9/11 to help the many children that lost their parent in that horrible tragedy. 14 years later all the children have grown and the program was not needed.

Sadly, the club went through some tragedy itself in the short time that it has been established when we lost our Charter member Lt. Tom Bohn. Tom was a 31 year vet of the FDNY when he passed. He was a great teacher and leader and is a big loss to these job, his friends and more importantly, to his family. RIP

Also, on Jan 17th, 2015, my 2nd daughter, Amber passed from complications of her illness. She would have been 28 in May. Again my heart was ripped out. Both of my daughters were special in their own way and were loved by all who met them. My only wish for my 2 daughters now is, that they are together again in heaven being able to walk and talk while Tommy watches over them.

I hope our club can raise thousands of dollars, but the more important message I wish to get out, is that you are not alone and we are all here to help, “Brothers helping Brothers”.